This is a great album I stumbled across today. I started listening and writing some notes, and eventually, I had to cheat and just do some Googling. I was writing things like “a lot of guitar slides.” I watched a video of the band playing live and saw that they have a lap steel guitar player, as well as someone playing the viola (or violin, I’m not sure, but it looks like a big violin). I was also surprised to find out that they were from Idaho, because it seems like most great bands like this are from Greece or Australia or something.

Their Bandcamp refers to the band as “high desert rockers” which makes sense. I find myself wanting to use the word “laidback” a lot. It’s got a very relaxed and comfortable vibe overall.

The opening track (as well as my introduction to this band), Palace Mountain Mirage, is instrumental. It’s the one played in the live video I found after deciding that a little Googling was in order. Vocals make their appearance by the time the second song, West The Sun, starts up. When I start albums like this, it’s always fun to guess whether or not the band will be instrumental.

“Time Like Smoke” is a more experimental / ambient piece that sounds more like a soundscape than a song. It oddly reminds me of Pink Floyd because there’s a sample in which it almost sounds like someone chuckling (or maybe that’s in my head) and it reminds of a specific section on the album Dark Side of the Moon.

In fact, to me, it seems as if the entire second half of the record is a little more spread out, spacey, and experimental. The journey the album takes you on from start to finish is a well thought-out one. 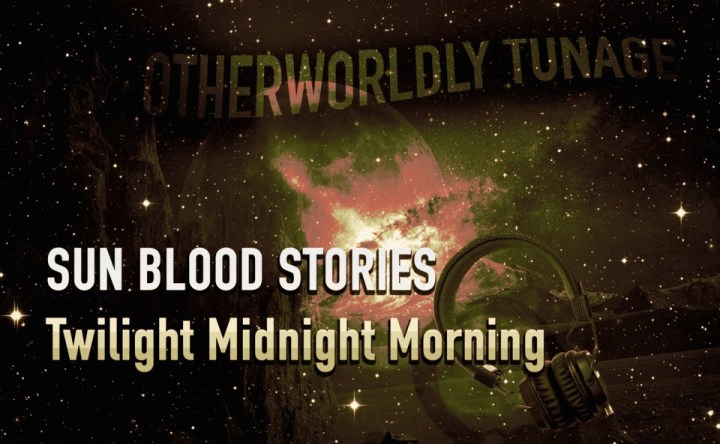 “With a respectable record of six LP’s, the original trio from Idaho, USA, delivers a sensory experience. His music is hypnotic, experimental, far from the hit and seeks to capture the listener within a dense sound layer produced by keyboards, guitars and the various patterns played by his drummer. A very interesting band for those who want to hear something very different from the radial. We recommend your album Twilight Midnight Morning (2015).

When the members of Sun Blood Stories spoke with Boise Weekly earlier this month, they talked about a problem they encounter when performing songs from their new album, Twilight Midnight Morning (Obsolete Media Objects, 2015). They enjoy playing the material live, but other songs just don’t seem to fit into the set.

“We talked about possibly interjecting new songs,” Amber Pollard said. “We have other songs; we’ve written other songs. But this album needs these songs, and we need to play it this way. It doesn’t work any other [way].”

SBS’s album release show at Neurolux on June 23, supported Pollard’s statement. The local quintet played through almost all of Twilight to a crowd of more than 100 people. The confident, impassioned performance suited what The Obelisk called the “vitality and adventurousness” of the album.

Nope, it hasn’t been all that long since the last Sun Blood Stories video — only about a month — but whatever. They keep making ’em and I’ll keep posting ’em. Interesting too how utterly different “Witch Wind,” which you can see below, is from the preceding clip for “Misery is Nebulous.” That was a seven-minute journey through human tragedy, ecological and geopolitical, while “Witch Wind” is dancing silhouettes. Yup. From visuals that make you feel sad to be alive to dancing. That pretty much sums up the scope of the Boise outfit’s 2015 long-player, Twilight Midnight Morning (review here), which I put on the other day simply because — and this is 100 percent true — I missed it. True story.

There’s not much by way of easy viewing in the new Sun Blood Stories video. Even the included footage of peaceful suburbia, 8mm home movies and other things that aren’t war, riots, Sandra Bland, various forms of disorder and/or representations of the general awfulness of our age are tainted and made complicit by context. The message of “Misery is Nebulous” is not at all nebulous: You do not have the one without the other. Or at least we as human beings living today don’t.

I’ll admit that for me placing the song in a social strata is a new context. Appearing as the penultimate cut on last year’s continually-impressive Twilight Midnight Morning (review here), “Misery is Nebulous” is surrounded by “Moon Song: Waxing” and “Moon Song: Waning” and so deep into the band’s got-weird head-trip noisefest that to me, its linear build didn’t necessarily seem to be the cathartic pulsation that the video makes it. Apart from ambient vocalizations, I’ll also add that it has no lyrics, in my own defense, and as it’s so easy to get lost in the drones and noise of the record’s back half, I guess I thought the Boise outfit — Ben Kirby, Amber Pollard, Nik Kososik (also The Western Mystics) and Jon Fust — were freaking out for freaking out’s own sake. Turns out they were being topical.

Imagine driving through a sagebrush-spotted desert, the sun a red orb slowly retiring to the bleary-lined horizon. Radio frequencies barely breach the isolation, and the music that filters through is slow and visceral, haunting, pagan and mood-alteringly psychedelic.

This is the sound of “high desert ghost music,” the prescription followed by members of the Boise band Sun Blood Stories. A live performance by the group is more than just a set list, it’s a convergence of sound, sight and emotion in the tradition of the concept album.

“We’ve been told it’s like a modern day opera, which is kind of cool,” said Amber Pollard, who sings and plays slide guitar in the band.

Brand new album from Sun Blood Stories called Twilight Midnight Morning. This Idaho band have a sweet droney style of music. Sun Blood Stories craft a witchy concoction of brooding drone-rock. The opening track “Palace Mountain Mirage” opens the album with an excellent slide guitar riff that sets the mood for the rest of Twilight Midnight Morning. Tracks 4 (Witch Wind) and 6 (Night Tremor) have a more highly driven bass line that makes for more of a psychedelic-metal feel to it. My favorite track on the record is the finale “Misery is Nebulous.” Sun Blood Stories brings such great musicianship to this record, and it sounds amazing, so go listen to it and support independent artists.

At the moment in Sun Blood Stories‘ second full-length where it seems most likely that you finally have the album figured out — that’s when it turns. Twilight Midnight Morning, as a title, might well describe the varied moods of the release’s 10 tracks/50 minutes, but the actual front-to-back listening experience, from the count of three that seems to signal a dip into hypnosis to the fading guitar echoes that close, is more complex than a linear progression of hours, and experimental flourish of effects-laden viola from Judah Claffey, slide guitar, ambient feedback, drones, swirls, keys — whatever it might be — is never far off. There are stretches of Twilight Midnight Morning where the Boise, Idaho, five-piece revel in flat-out gorgeous post-rock melody-wash, as on the brooding contemplation of “Found Reasons Found Out,” with swirling guitar, dual vocal croon and a wide-open structure that, like much of the record, takes nothing away from its memorability or lessens the impression made.

It’s quite a journey, one which those who haven’t heard SBS lately might not expect. In a departure from the group’s earlier blues-heavy sound, Twilight’s eerie tunes, sinuous grooves and waves of voices, riffs and hallucinatory noises call to mind early Funkadelic andBitches Brew-era Miles Davis. Metal-centric music blog The Obelisk called Twilight “a gorgeous wash that careens between minimalist openness, dual vocals that capture folkish intent with zero folkish pretense and psychedelic guitar howl, all the while swirling with experimental undercurrents and ambient heft.”